Salt Lake City, Utah (6 December 2016), FamilySearch International, the world’s largest genealogy organization has given a newly indexed database of the historic Freedmen’s Bureau Records to the Smithsonian National African American Museum of History and Culture in Washington, D.C. The database contains genealogical information of freed African Americans after the Civil War and can be searched online at DiscoverFreedmen.org. 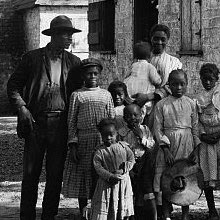 Elder D. Todd Christofferson of the Quorum of the Twelve Apostles of The Church of Jesus Christ of Latter-day Saints presented the database on a flash drive to museum founding director Lonnie Bunch in front of an audience of congressional leaders, genealogical experts and volunteers who were key to the project’s success. The event took place at the museum Tuesday morning, December 6, 2016.

“I can think of no better way to honor the unprecedented commitment of these volunteers, as well as the bravery and resilience of those whose names have now been found on these records, than to have this database symbolically housed at the National Museum of African American History and Culture,” said Elder Christofferson.

The museum was dedicated September 24 during a three-day celebration.

“For the first time in history, African Americans can now bridge the gap between freedom and slavery and reunite their families — on paper — that were once torn apart by slavery,” he added.

“Collaborating on the Freedmen’s Bureau Project is a fundamental expression of our commitment to family history,” explained Bunch. “At the end of the Civil War, formerly enslaved individuals went to great lengths to reunite their families. The records of the Freedmen’s Bureau are essential to understanding their desires and reconstructing the histories of the families they formed.”

“Using modern, digital and web-based technology and the power of volunteers, this project is unlocking information from a transformative era in the history of African American families and the American nation,” said Hollis Gentry, a genealogical specialist at the museum. “Making that information available globally via the web will allow all of us to enlarge our understanding of the past.”

Key to the project’s success were the nationwide chapters of the Afro-American Historical and Genealogical Society who partnered with local Mormon congregations, black churches and others in more than 100 indexingevents. (See "Review of Events of the Freedmen's Bureau Project")

The Freedmen’s Bureau, organized under an 1865 Congressional order at the conclusion of the Civil War, offered assistance to freed slaves in many ways. Handwritten records of these transactions include records such as marriage registers, hospital or patient registers, educational efforts, census lists, labor contracts and indenture or apprenticeship papers and others. The records were compiled in 15 states and the District of Columbia.

All of the newly indexed Freedmen’s Bureau Records can be searched for free at discoverfreemen.org. Thom Reed, marketing manager for FamilySearch, said the organization will now focus its efforts on teaching African Americans how to search the new digital records to discover and reunite with the lost generations of their families (See "Getting Started with FamilySearch and the Freedmen's Bureau Records").

About FamilySearch
FamilySearch International is the largest genealogy organization in the world. FamilySearch is a nonprofit, volunteer-driven organization sponsored by The Church of Jesus Christ of Latter-day Saints. Millions of people use FamilySearch records, resources, and services to learn more about their family history. To help in this great pursuit, FamilySearch and its predecessors have been actively gathering, preserving, and sharing genealogical records worldwide for over 100 years. Patrons may access FamilySearch services and resources free online at FamilySearch.org or through over 4,921 family history centers in 129 countries, including the main Family History Library in Salt Lake City, Utah.