Email ThisBlogThis!Share to TwitterShare to FacebookShare to Pinterest
Labels: genealogy

Search the Joseph Smith Papers for your Ancestors on FamilySearch.org

The following is from the FamilySearch Blog.

Did Your Ancestors Interact with the Prophet Joseph Smith?

The Church History Department of The Church of Jesus Christ of Latter-day Saints is pleased to announce an exciting collaborative effort between the Joseph Smith Papers Project and FamilySearch. FamilySearch.org users can now easily view documents in the papers of Joseph Smith that mention their direct ancestors. With just a few clicks, it is now easy to see how your ancestors interacted with Joseph Smith and other early members of The Church of Jesus Christ of Latter-day Saints.
The new website is free and available now at FamilySearch.org/josephsmithpapers#.
“Using the power of FamilySearch.org and the scholarship of the Joseph Smith Papers Project, descendants of early Church members can now connect to original source documents where their own progenitors are mentioned,” said Elder Steven E. Snow, Church Historian and Recorder. “Seeing our ancestors in the original papers will provide insight and inspiration as we see how our own lives intersect with the . . . history of the Church,” he continued.
The new website combs through all the digitized pages of the Joseph Smith papers and compares names from the documents with the names of ancestors in your family tree on FamilySearch.org. You can then easily view original historical documents from Church history containing ancestors’ names and search other related historical records on FamilySearch.org.
(read more..)

The following is from Zap The Grandma Gap and Family ChartMasters.

E-Books Now Available
Now all of our Zap The Grandma Gap Books are available in e-book format! 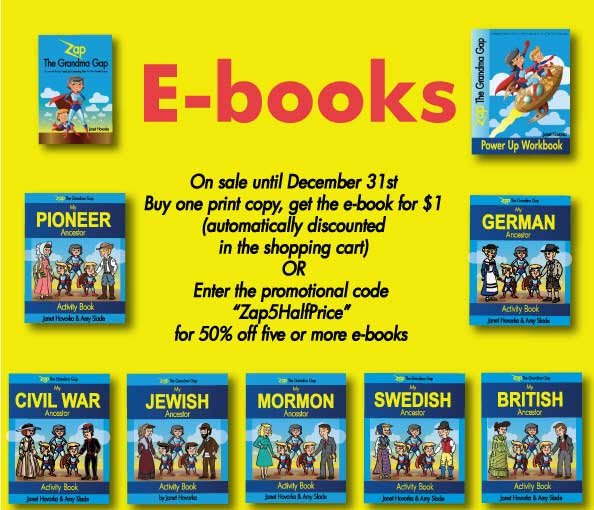 I am offering an introductory sale on all of the e-books.  For complete details on this sale and for gifting options, please take a look at the full blog post on the Chart Chick or

Taken from The Chart Chick blog:

I am running a sale on gift certificates from now until December 22nd. Even if you are a wait-until-the-last-possible-second kind of shopper, you can get an instant gift that doesn't come with a killer price tag. From now untilDecember 22nd, I am offering 25% off of all gift certificates.  It's so easy and you can print the gift certificate directly from your computer immediately after purchase. Not to mention your loved ones still get a meaningful gift, to their exact specifications, with only a few mouse clicks from you. You save money and get all of the praise without the hassle and sweat. This is absolutely the best way to go as Christmas and Chanukah approach.
Continue reading this post on The Chart Chick Blog for full details on how to get your instantly downloadable gift certificates.  Or just

The following is from the Illinois State Genealogical Society.

Join us on Tuesday, January 13, at 8:00 PM Central, when Lisa Louise Cooke will teach us how to unlock mysteries in our genealogy research Using Google Earth for Genealogy. To attend this webinar, register at https://attendee.gotowebinar.com/register/2933074072977427457.

Presenter: Diana Smith
Registration: https://attendee.gotowebinar.com/register/6829079176792483329
* This webinar is held one week earlier than our regular schedule to accommodate those attending the FGS 2015 and RootsTech conferences
March 10 – Finding Your Femme Fatales: Exploring the Dark Side of Female Ancestors

For the complete list of upcoming webinars, visit http://ilgensoc.org/cpage.php?pt=234.

Support the ISGS Webinar program by making a financial contribution, which will help ISGS expand its educational offerings in a virtual manner.  To learn why we need your help, or to make a contribution, please visit  http://ilgensoc.org/cpage.php?pt=345.

Please direct any questions to the ISGS Education Committee at isgseducation@ilgensoc.org.


The 2015 ISGS Webinar Series is Sponsored by FamilySearch (http://familysearch.org).

Posted by Renee Zamora at 9:54 AM 0 comments

Email ThisBlogThis!Share to TwitterShare to FacebookShare to Pinterest
Labels: isgs

That following is from the Salt Lake Institute of Genealogy, sponsored by the Utah Genealogical Association. You do not have to register for a full course in order to take advantage of these events.


Evenings at the 20th Annual Salt Lake Institute of Genealogy are packed with exciting events.   Please consider the following that may be added to your original registration online.

Colloquium Banquet:  The Salt Lake Institute of Genealogy will hold its first annual SLIG Colloquium on Saturday, January 10, 2015.  Leaders in our field will come together for a day of discussion on topics such as inter-field integration and DNA.  SLIG participants and guests are invited to join us in celebrating this exciting event that evening at the Academic Colloquium Banquet.  Banquet tickets are $45; colloquium presenters will present a synopsis of their colloquium presentations.

Plenary session:  Our 20th anniversary plenary speaker will be Elizabeth Shown Mills, CG, CGL, FASG.  She will present "What's the Evidence?” on Monday, January 12th at 7:00 PM.  The plenary is open to both SLIG students and the public - feel free to bring your travel buddy with you.  Please RSVP through the registration system for planning purposes.
Premier Viewing of Genealogy Roadshow:  Join hosts of PBS’ Genealogy Roadshow, Josh Taylor and Mary Tedesco, for a preview of the new season’s first episode.  The screening will be held following the plenary session onMonday, January 12th at 8:15 pm and will be followed by an open Q&A with the hosts.  No cost.

Evening Classes:  Your days at SLIG are likely spent pouring over exhaustive amounts of information.  Our evening classes are set to enhance your research skills with technology and context.  Four classes are  available at a cost of $10 each:
Tuesday, January 13, 7:00 pm:
"Turning Biographical Facts into Real Life Events: How to Build Historical Context,” John Philip Colletta, PhD.
"Tech No Genealogist Should be Without: Powerful Solutions for Surviving the Data Avalanche," Valerie Elkins.
Thursday, January 15, 7:00 pm:
"Geo-Genealogy: Finding and Interperting Where your Ancestors Lived,” presented by Jay Fonkert.
"Nifty & Powerful Technologies for Genealogical Analysis & Documentation,” Ron Arons

Mini-Problem Solving Roundtable:
Wednesday we are offering a unique peek into our problem solving course, where students bring their own research problem to discuss.  Roundtables will be set up based on a focus area or region and time period, each with a professional on hand to lead the discussion and guide the group in developing next research steps.  It's like crowd sourcing your research problem.  Participation is free, but is seating is limited, so make sure you sign up.  You will be asked to submit your region or focus area and time period immediately following registration and be prepared to discussed your research problem at your roundtable at the event.

Completion Banquet:  David Rencher, AG, CG, Chief Genealogical Officer at FamilySearch will give the keynote address at our 20th anniversary completion banquet to be held Friday, January 16th at 7:00 pm.  The banquet is preceded by a networking social (no-host cash bar) at 6:00 pm.  While students will receive their completion certificates at the end of their class, the banquet gives us an opportunity to celebrate the week, confirm new acquaintances, and get a sneak peak at what’s coming for 2016. The Utah Genealogical Association will announce the newest Fellow of UGA (FUGA) and give out several other awards at the banquet.   Included with SLIG registration, but ticket required; guest tickets also available for $60.

Posted by Renee Zamora at 9:49 AM 0 comments

Email ThisBlogThis!Share to TwitterShare to FacebookShare to Pinterest
Labels: slig

The following is from 23andMe.


23andMe Study Sketches Genetic Portrait of the United States
First large-scale nationwide analysis yields maps of genetic ancestry that reflect US history
Mountain View, Calif. – December 18, 2014 – 23andMe, Inc., the leading personal genetics company, today announced the publication of a study that pinpoints fine-scale differences in genetic ancestry of individuals from across the United States.
Since immigrants first arrived more than four hundred years ago, the United States has served as a meeting place for peoples from different continents. This study illuminates how American history and the ongoing mixing of peoples with African, European, and American origins can be seen in our DNA.

*Data was contributed by 23andMe customers who provided informed consent to take part in this research under a protocol approved by the AAHRPP-accredited institutional review board, Ethical and Independent Review Services.
About 23andMe
23andMe, Inc. is the leading personal genetics company dedicated to helping people access, understand and benefit from the human genome. The vision for 23andMe is to personalize healthcare by making and supporting meaningful discoveries through genetic research. 23andMe, Inc., was founded in 2006, and the company is advised by a group of renowned experts in the fields of human genetics, bioinformatics and computer science. More information is available at www.23andme.com.

Posted by Renee Zamora at 9:37 AM 0 comments

Email ThisBlogThis!Share to TwitterShare to FacebookShare to Pinterest
Labels: dna

The following is from ICAPGen.

Registration is now open for the ICAPGen Study Groups. The next group will begin in January 2015.

What is an ICAPGen Study Group?
This is a 3 to 6 month study group that meets twice a month via the internet for an hour. Each group contains people with similar chosen regions. These groups cap at 8 to 10 people. Groups are organized to begin at the start of each quarter throughout the year.

What kind of commitment is needed to participate in one of the ICAPGen Study Groups?
The participant:

How Do I Register?
If you are interested in participating in the January 2015 Study Group please send an email to the address below. The email needs to include the following information:
·         Name
·         Email Address
·         Snail Mail Address
·         ICAPGen US Region or International Country chosen for application & testing
·         Brief genealogical background
·         Quarter in which you would like to begin in the Study Group (Jan, April, July, Oct)
·         Send this information to: StudyGroup@icapgen.org

Posted by Renee Zamora at 9:34 AM 0 comments

Email ThisBlogThis!Share to TwitterShare to FacebookShare to Pinterest
Labels: icapgen

Email ThisBlogThis!Share to TwitterShare to FacebookShare to Pinterest
Labels: uga

The following is from Progeny Genealogy.

You can now move rectangles in the Ancestor, Descendant, Hourglass, and Bowtie charts, edit the chart by pruning selected branches, and print or publish to PDF, JPG, PNG, GIF or BMP image format. Just scroll the mouse to zoom in or zoom out, and adjust the size of the chart so it fits exactly in the page or pages that you choose.
Charting Companion also speaks 18 languages!

Email ThisBlogThis!Share to TwitterShare to FacebookShare to Pinterest
Labels: progeny

The following is from Virtual Institute of Genealogical Research.


Virtual Institute of Genealogical Research Offers New Interactive Option for Courses
RALEIGH, North Carolina, 17 December 2014:
The Virtual Institute of Genealogical Research is evolving!
Student responses to our first course have reinforced our plans concerning the need for additional instructor interaction and feedback. Beginning in 2015 we will offer instructors and students this option.
Previously our courses came in a single format: four 90-minute lecture sessions with Q&A, extensive syllabus material, and at least one practical exercise.
Plus courses will consist of:
The Plus option for any course will cost $99.99, as compared to the $69.99 cost of standard courses.
J. Mark Lowe’s “Preparing the Field: Understanding the Agricultural Records of Our Ancestors” will be the first course to offer this new option. Beginning on Wednesday, 17 December 2014, buttons will appear on the website to purchase either the Standard or the Plus option for this course. Many of the Institute’s future courses will also offer this option.
For more information visit www.vigrgenealogy.com or email vigrgenealogy@gmail.com.
About the Virtual Institute of Genealogical Research
The Virtual Institute of Genealogical Research offers virtual, year-round courses on a wide variety of genealogical subjects from top experts in the field. For more information visit www.vigrgenealogy.com or email vigrgenealogy@gmail.com.

The following is from FamilySearch. I did already post a similar announcement. I didn't realize the official press release provided more information.

Posted by Renee Zamora at 6:56 AM 0 comments

The following is from RootsTech.

Posted by Renee Zamora at 6:16 AM 0 comments