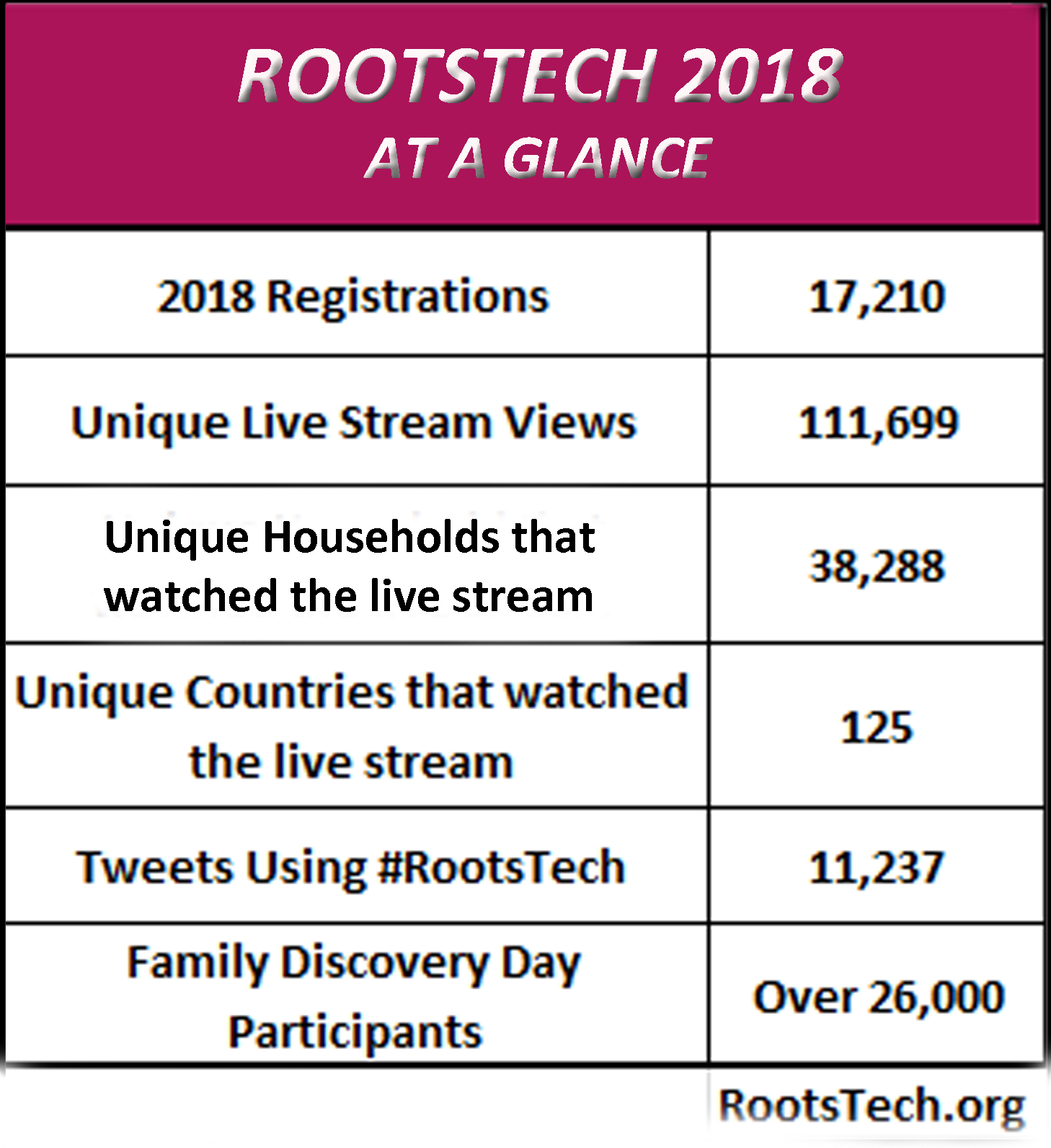 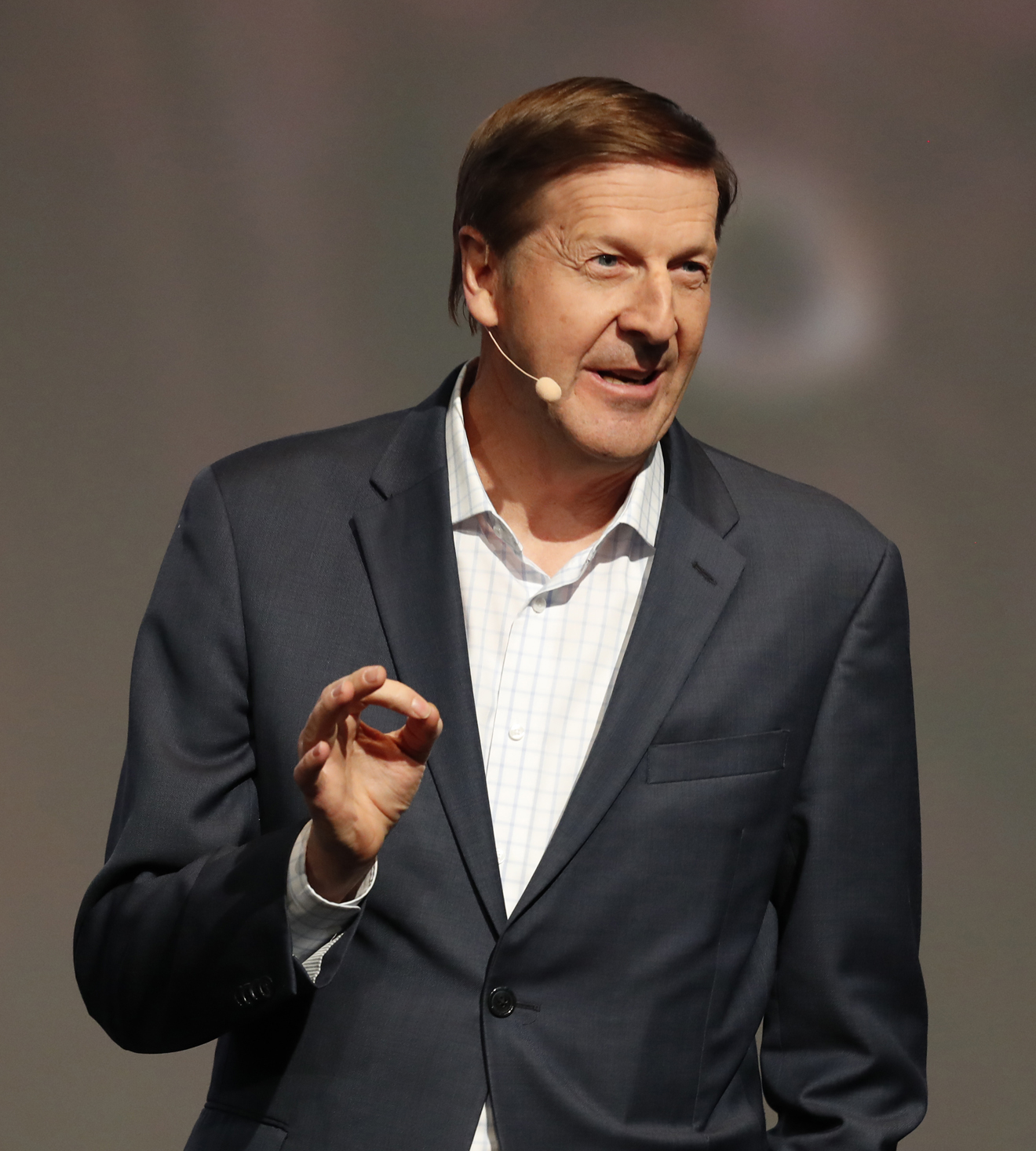 In his keynote, FamilySearch CEO Steve Rockwood suggested that when you discover you are related to someone, you treat him or her differently. Using geo fencing technology and a little engineering wizardry, FamilySearch enabled attendees to use its Family Tree mobile app feature "Relatives Around Me" to make connections with unknown cousins in attendance at the conference, showing how they were related and enabling them to communicate and rendezvous. Astonishingly, over half of the attendees (8,450 people) were connected with other conference goers. The total number of cousin connections found at the conference (from 1st to 10th cousins) were 2,334,110, which makes the average number of relatives discovered at the show per user 276.
WATCH STEVE ROCKWOOD'S ROOTSTECH 2018 TALK
The show offered over 300 mostly packed class sessions on a vast range of family history-oriented topics, an expo hall filled with vendors’ displays and products, and enrichment events nightly filling every moment with family activity. It was energetic, lively, exciting, entertaining, inspirational, and educational. 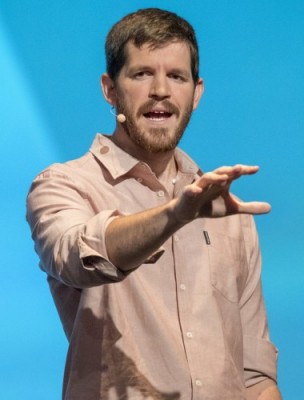 Brandon Stanton, author of the blog and book Humans of New York, shared his story of how his dream job came true through hard work and determination. He said, "Following your dreams is nothing but hard work." He said that we shouldn't get to a place where you don't have to work, but to get to a place where you get to choose your work. His blog, and resulting books, illustrate the importance of all individuals. He says "listening is a scarce commodity" in this age of selfies. Stanton has found that everyone needs to tell someone about themselves, if they can find someone to listen long enough—a key to the success of his bestselling books that depict pictures and intimate and personal stories of people around the world. When asked why people share personal stories with them, he replied, "I ask." He says that the feeling of being validated, the feeling of being heard unlocks something in people that allows them to share.
WATCH BRANDON STANTON'S ROOTSTECH 2018 TALK 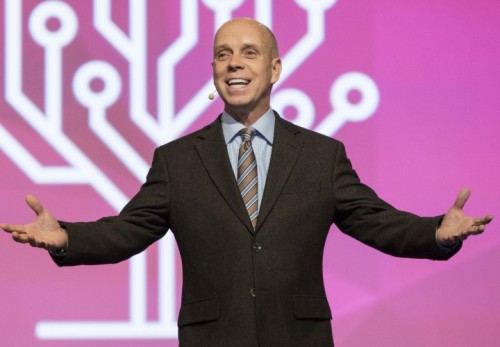 Scott Hamilton, an Olympic gold medalist, is as energetic and affable today as he was during his career run of athletic medals. He shared a touching story about himself as an adopted child, his bouts with different types of cancer, and the help of “family” figures in his life. He captivated the audience with his love of family and how important families are in everyone’s lives. He told about his own family, his wife, and the miracle and blessings that are his two natural children and two adopted children from Haiti.
WATCH SCOTT HAMILTON'S ROOTSTECH 2018 TALK 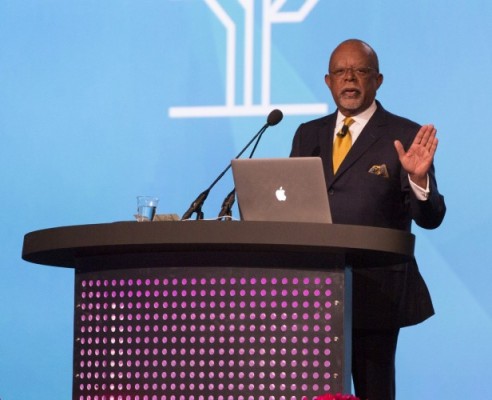 Henry Louis Gates, Jr., host of PBS's hit series Finding Your Roots, shared how an obituary of an "estimable" great aunt he read when he was a child planted the seed for his lifelong love for family history, and how knowing their stories can impact future generations. Gates shared how his journey through an Ivy-league education, African American roots, and a DNA test paved the way to a string of genealogy-related television shows that led to his current popular and long-running series on PBS. He introduced the DNA Detective, CeCe Moore, and explained how DNA is breaking down long held family history brick walls, dispelling myths, and blessing the lives of people young and old. He has created an initiative to introduce K-12 children to the joys and benefits of discovering their family histories in a summer camp called Finding Your Roots: The Seedlings.
WATCH HENRY LOUIS GATES JR., AND CECE MOORE'S ROOTSTECH 2018 TALKS 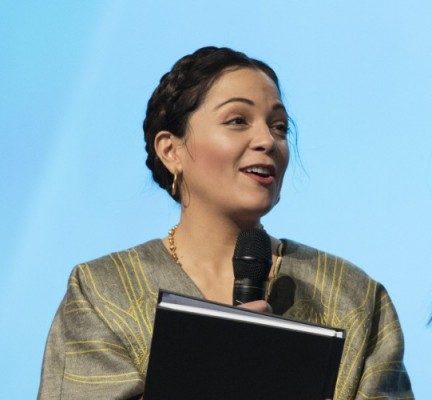 Natalia Lafourcade, a Mexican pop-rock singer and songwriter, is one of the best known singers in the pop rock scene in Latin America. She shared the importance of family memories and quipped that family lore says she had French pirate ancestry. FamilySearch revealed a personal genealogy that confirmed her French roots, but could not validate the pirate family legends. She sang songs from her latest album, concluding with the Oscar-winning song “Remember Me” from the Oscar winning animated movie Coco.
WATCH NATALIA LAFOURCADE AT ROOTSTECH 2018

The RootsTech 2018 Innovation Showcase, hosted by Extreme Genes'  Scott Fisher, addressed the state of historic records, digital memories and DNA.  Panelists included Judy Russell, legal genealogist, David Rencher, FamilySearch CGO, and Kurt Witcher, director of the Fort Wayne, Indiana, Allen County Public Library, Brewster Kale of Internet Archives, and five popular commercial DNA companies.
WATCH THE INNOVATION SHOWCASE
In concert with Brandon Stanton's keynote, RootsTech invited aspiring local photographers and writers to participate in a video-story contest. Over 200 people entered the contest, and the winners were Russell Hathaway, Karen Foster, Amberley Beck, and Cali Church. They received prizes such as a Dell laptop and Canon cameras. The pictures with their stories will be published in the future on RootsTech and social media channels. 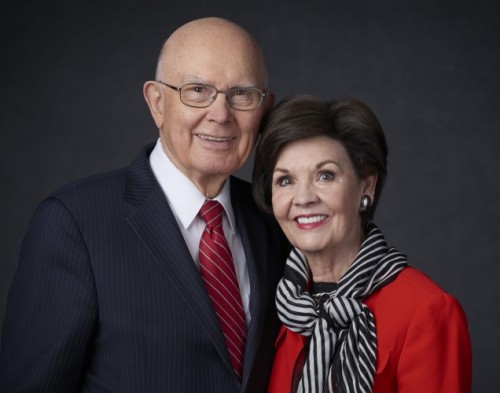 RootsTech 2018's Family Discovery Day welcomed more than 26,000 attendees—mostly families with children. President Dallin H. Oaks, first counselor in the First Presidency of The Church of Jesus Christ of Latter-day Saints, and his wife, Sister Kristen M. Oaks, showed how they share their family history with their posterity. Their grandchildren and great grandchildren participated, sharing how they have been able to personally connect with ancestors through written histories, photographs, and stories.
Also participating in Family Discovery Day were Hank Smith and Jason Hewitt, and singers Evie Clair, Kenya Clark, and Alex Melecio.
WATCH THE FAMILY DISCOVERY DAY SESSIONS ONLINE
About RootsTech
RootsTech, hosted by FamilySearch, is a global conference celebrating families across generations, where people of all ages are inspired to discover and share their memories and connections. This annual event has become the largest of its kind in the world, attracting tens of thousands of participants worldwide.

Quest to Find the Painting of the Ship Brooklyn

Quest to Find the Painting of the Ship Brooklyn

Article Summary: Discovery how genealogical research skills and the standards of art provenance guided a research physicist to find the missing painting of the ship Brooklyn that played an important role in Mormon history. FAMILYSEARCH NEWSROOM FEATURE ARTICLE (14 March 2018)--In 1845, Mormon newspaperman Samuel Brannan was instructed by leaders of The Church of Jesus Christ of Latter-day Saints to charter a passenger ship that could transport approximately 240 Mormon emigrants from the eastern seaboard of the United States to the west coast (California achieved its statehood a little later in 1850).

More 160 years later, the Church engaged Dr. Lorin K. Hansen, an energy physicist and historian of early Mormons in the California territory, to help track down the location of an original painting of the ship Brooklyn in about 1995. A few black-and-white photographs of the painting existed, but the whereabouts of the original painting or its artist, remained a mystery.

At first glance, one might not make the connection between genealogical research techniques used by genealogy professionals to validate a person or familial relationship with the provenance protocol followed by curators of fine or historical art. However, very similar methods and approaches are used by the two professions.

Read the free article "Quest to find the Painting of the Ship Brooklyn" by Glen Greener to discover how Dr. Hansen used both genealogical research techniques and the discipline of tracing the art provenance to locate the current owner of the ship Brooklyn and the miracles that transpired to purchase it for the Church History Museum in Salt Lake City, Utah.

Find your ancestors with new historic records published on FamilySearch this week from Austria, BillionGraves, Brazil, England, France, Germany, Guatemala, Idaho, Illinois, Mexico, Spain, and Texas. Search these new free records by clicking on the collection links below or search over 6 billion free records at  FamilySearch.
Searchable historic records are made available on FamilySearch.org through the help of thousands of volunteers from around the world. These volunteers transcribe (index) information from digital copies of handwritten records to make them easily searchable online. More volunteers are needed (particularly those who can read foreign languages) to keep pace with the large number of digital images being published online at FamilySearch.org. Learn more about volunteering to help provide free access to the world's historic genealogical records online at FamilySearch.org/indexing.
About FamilySearch.org
FamilySearch is the largest genealogy organization in the world. FamilySearch is a nonprofit, volunteer-driven organization sponsored by The Church of Jesus Christ of Latter-day Saints. Millions of people use FamilySearch records, resources, and services to learn more about their family history. To help in this great pursuit, FamilySearch and its predecessors have been actively gathering, preserving, and sharing genealogical records worldwide for over 100 years. Patrons may access FamilySearch services and resources for free at FamilySearch.org or through more than 5,000 family history centers in 129 countries, including the main Family History Library in Salt Lake City, Utah.

The following is from FamilyTreeDNA.

The following is from MyHeritage. The following is from Progeny Genealogy.

Volunteer Opportunities
Please contact the UGA Conference Committee if you would like to contribute your talents and time to assist with this event.

Email ThisBlogThis!Share to TwitterShare to FacebookShare to Pinterest
Labels: uga

Bio:
Lara Diamond is an Ashkenazic Jew, so she gets to have particular fun with her completely endogamous genome. She is president of the Jewish Genealogy Society of Maryland, leads JewishGen's Subcarpathian SIG, is on

JewishGen's Ukraine SIG's board of directors. She also runs multiple district- and town-focused projects to collect documentation to assist all those researching ancestors from common towns. She blogs about DNA and her Eastern European research at http://larasgenealogy.blogspot.com.

Registration is free and open to the public.  Click here to register.

Description:
America has been a nation on the move since the first landings in the colonies. From buffalo traces and Native American trails to rivers and canals, Americans found a way to keep pushing “west”. This presentation concentrates on the most common means of travel in the New World. Migration trails and patterns will be discussed, as well as the many rivers and canals that interconnected us as a nation. A case study will be demonstrated showing a “lost” ancestor”.
Bio:
Peggy Lynn Clemens Lauritzen, AG, has been involved in genealogy since before her birth. Her parents were excellent genealogists, and instilled the same love of history and family in her and her three sisters. One of her favorite pictures is of her mother on her way to do cemetery research four days before Peggy’s birth. Her roots run deep into the South, where she is accredited. They involve the states of Kentucky, Virginia, Tennessee, North and South Carolina, and some areas of Pennsylvania, and she loves the area of Appalachia. Though not inclined to do client research, she finds great satisfaction in seeing others discover their ancestors through the classes she teaches. She and her husband are Directors of the Family History Center in Mansfield, Ohio. More information about her is on her web site and ICAPGen profile.